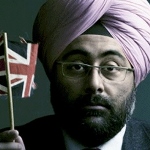 Hardeep Singh Kohli is an experienced writer and broadcaster. He originally studied law, but moved into broadcasting as the wig and the turban together don’t really work together and the gowns were cut in a really unflattering way.

Hardeep has written and presented many documentaries for both BBC and Channel Four, including A Beginners Guide to Scientology, Hardeep Does…, where he explored topics as diverse as sex, race, pets, religion and family. His work as a presenter includes The Last Word and Late Night Live and Up All Night for Radio Five Live. Hardeep wrote and directed Meet The Magoons and Grease Monkeys for BBC3. He recently came second in Celebrity Masterchef.

Born in 1969, Hardeep Singh Kohli grew up in Scotland where, whilst studying at law school, he worked at the Citizen’s Theatre and managed various restaurants in Glasgow.

Upon graduation Hardeep was offered a job at BBC Radio Scotland and was soon chosen as one of only a handful of prestigious BBC graduate production trainees.

Two years of training around every department of the BBC was followed by a move to London’s Televison Centre to direct Children’s TV. He then went off to Series Direct and present for Janet Street Porter in Manchester on Reportage. Then it was back to London to direct the RTS and BAFTA winning show It’ll Never Work. The call of the free world beckoned the erstwhile BBC boy, he jumped.

A while spent in development and directing commercials, Hardeep gave vent to his greatest passion, that of writing. He wrote various short films, screenplays and comedies and managed to make a handful, some of which won awards, some of which got shown all over the world. He wrote and directed for BBC drama, ITV drama and was commissioned to write, direct and star in a Comedy Lab for Channel 4. The Comedy Lab was a hit and soon a series was commissioned, Meet the Magoons for Channel 4.

Meanwhile he had started contributing on the radio, making most impact on BBC Radio 5 Live where he appeared on almost every show across the network, soon becoming a stalwart. He now presents Up All Night for the station and boy, how he loves it.

While that was all going on Hardeep wrote and presented a one-off documentary, In Search of the Tartan Turban for Channel 4. The show was nominated for an RTS and won a BAFTA. Hardeep was also commissioned to write and present a five part documentary show with Tiger Aspect, about contemporary Britain. The show, Hardeep Does… has just been completed.

He is now a Front Row regular on Radio 4, is writing a new sitcom for the BBC and is also about to take up Bikram Yoga ….