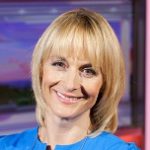 Louise Minchin’s career has taken her from broadcaster to triathlete.

Louise began her career working for the BBC World Service in Argentina. In 1998 she debuted on BBC Radio 5 Live. Five years later she began on BBC News as a presenter, working initially with Jon Sopel.

During her time working as a presenter for the BBC Louise appeared on a whole raft of diverse radio and television shows. As well as presenting BBC Breakfast Louise hosted Missing Live which ran for four weeks every year for three years.

In her time as a leading news presenter Louise brought to the public many of the most outstanding news stories of the last decade including the 7/7 London bombings, the capture of Colonel Gadaffi, and the Deepwater Horizon disaster.

Louise’s was honoured in 2014 by the University of Chester as an Honorary Doctor of Letters.

Now with two daughters, she has taken up the ‘hobby’ of running Triathlons, as if something as tough as triathlons can be called a hobby! Still a freelance journalist for the BBC, she has begun writing and Dare to Tri tells her extraordinary journey from BBC presenter to being able represent Great Britain at the World Triathlon Championships.