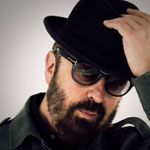 Dave Stewart is a musician, a songwriter and a producer. Born in Sunderland in North East England in 1952 he’s famous around the world for his work with The Eurythmics. As an entrepreneur he’s also the founder of Weapons of Mass Entertainment, a production and management company involved in music production, songwriting, commercials, film, music video, documentary programming, and independent productions. Plus he worked with the late Paul Allen, co-founder of Microsoft, to create The Hospital Club, a London-based creative centre and members’ club. In 2010, Stewart published The Business Playground: Where Creativity and Commerce Collide.

Over a career of more than thirty years Dave Stewart has enjoyed tremendous success selling more than one hundred million albums. He came to fame as one half of The Eurythmics and, with Annie Lennox, created worldwide hits such as Sweet Dreams, Here Comes The Rain Again and When Tomorrow Comes.

As a producer, Dave has worked with Jon Bon Jovi, Bono, Mick Jagger, Paul McCartney, Ringo Starr, and Joss Stone – earning him the Brits Awards Best British Producer Award three times. He has also worked film soundtracks and stage productions, including Madagascar 3 from Dreamworks, the musical adaptation of Ghost and the box office hit, Alfie, for which he won a Grammy and a Golden Globe.

Dave Stewart is also a determined charity campaigner and philanthropist. He worked with Nelson Mandela in 2002, organising the 46664 campaign and concerts in the fight against AIDS in South Africa. In 2007 he launched Greenpeace Works, a plan for celebrities to work with Greenpeace on many pressing environmental issues.

In 2015 Dave launched the First Artist Bank offering investment and promotion to artists and serving as a tool for currency management, monetization and product marketing.

His autobiography Sweet Dreams Are Made Of This was published in 2016.

A hugely versatile public speaker, Dave Stewart delivers talks on a host of topics – from his life as a successful musician and producer to business, branding, and creativity.