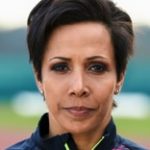 Dame Kelly Holmes DBE dreamed of Olympic Gold. At school she pursued her talent thanks to the belief and support of her teachers whilst her family ferried Kelly to race meetings up and down the country. Nevertheless her young athletics career was overshadowed by repeated physical injuries and she suffered episodes of clinical depression and of self-harm. Kelly almost turned away from athletics altogether. She joined the Army and after starting as a lorry driver went on to become an excellent physical training instructor. Sport and fitness became a big part of her armed forces career.

Nevertheless her depression and mental health issues challenged Kelly right up to the Olympic Games of 2004. Famously, in the Athens games, Kelly, representing her country, went on to triumph as the double-gold winner of both the 800 metres and 1500 metres races. With her great middle-distance victories she had become the first woman ever to win double Olympic gold and the first British contender to do so for more than eighty years. She was voted BBC Sports Personality of the Year 2004 and in 2005 was awarded the honour of Dame Commander of the British Empire (CBE) for her services to athletics and sport. In 2010 she was inducted into the Athletics Hall of Fame and in 2018 Kelly Holmes was appointed as an Honorary Colonel in the Royal Armoured Corps Training Regiment (RACTR).

Since retiring from athletics Kelly’s life has been busier still. She founded the Dame Kelly Holmes Trust to help young sportsmen and women and to get disadvantaged young lives on track using the unique skills of world class athletes to enable and to empower young people. And in continuing her push for excellence Kelly’s new book Running Life Running Life: mindset, fitness & nutrition for positive wellbeing was declared Sports Health and Fitness Book of the Year in The Telegraph Sports Book Awards of 2019.