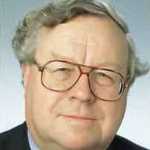 Lord Cormack is a highly respected politician recognised for his contribution to our democracy and one of our longest serving Parliamentarians.

Lord Cormack was born in 1939 and was educated in Grimsby and at the University of Hull where he graduated with Honours in English and History. He is a Freeman of the City of London, and he was knighted in the New Year’s Honours List in 1995. He served on the General Synod of the Church of England from 1995 until 2005.

Lord Cormack was elected Member of Parliament for Cannock in the general election of 1970. Following boundary redistribution he was elected Member for South Staffordshire in the 1974 general election which he represented until his retirement in 2010. Lord Cormack founded the All Party Parliamentary Arts and Heritage Group and served as its Chairman for 30 years. He was also Chairman of the All Party Parliament groups for Finland and Bosnia. In 1996 he was made a Commander of the Order of the Lion of Finland.

He was created a life peer in 2010 as Baron Cormack. He sits on the Conservative benches of the House of Lords. In 2011 he was appointed Deputy Lieutenant of Staffordshire.

He is a former Chairman of the Campaign for the Release of Soviet Jewry, Chairman of the Widows and One Parent Families Group and Chairman of the Parliamentary Group of the Anti-Slavery Society. He was a member of the Council of the Winston Churchill Memorial Trust from 1983 to1993. In 1984 he was visiting lecturer at the University of Texas and in 1985 made an Honorary Citizen of that State.

In 2001, he became Chairman of the History of Parliament Trust and served on the Select Committee on Foreign Affairs from 2001 to 2003. In 2002, he was appointed as the Conservative Parliamentary Party’s representative on the House of Commons Commission, a position he left on becoming Chairman of the Northern Ireland Affairs Committee in 2005.

Sir Patrick is a Visiting Senior Lecturer at the University of Hull and is also a Senior Associate Member of St Antony’s College Oxford, of which he was a Visiting Fellow in 1994/5. He has lectured and spoken extensively in this country and the USA. A frequent broadcaster, he was a team captain on BBC Radio 4’s Parliamentary Questions for eight years. He edited the House Magazine for 23 years, becoming Life President and Chairman of the Editorial Board. He has written countless articles and 6 books, including one on the Palace of Westminster and others on English cathedrals and British castles. He also wrote a life of William Wilberforce.

Cormack was created a life peer in 2010 as Baron Cormack