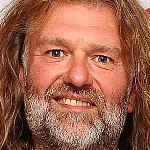 Big, blonde-bearded Simon King from the North-East and fellow biker Dave Myers from Barrow-in-Furness both worked in some unusual places before coming together to form The Hairy Bikers.

Whilst their underlying passion for food continued to grow, Simon worked as a first assistant director and locations manager for film and television productions (including the Harry Potter films), while Dave worked for the BBC as a make-up artist, specialising in prosthetics. The pair met on the set of a Catherine Cookson drama. Working together, they realised their shared appreciation for both motorbikes and food…and so The Hairy Bikers were born.

The hard working duo continued 2011 with The Hairy Bikers’ Cook Off, an 8 part series which mixed cooking with celebrity chat. 2012 saw them produce Meals on Wheels, Bakeation, Mississipi Adventure and The Hairy Dieters. They took the Larger than Live show – a combination of cooking, special guests, dancing, singing and stand-up –  on a 48 date tour of the UK.  Thanks to audience demand they then added a further 38 dates in 2013.

2013 also saw the publication of the Great Curries book and the airing of Everyday Gourmets on BBC2. With a growing list of titles to their names, currently over 10, it’s unsurprising that Dave and Si are both members of the Food Writers’ Guild.

Combining their zest for both adventure and food with their laugh-out-loud capacity for fun the Hairy Bikers make a very entertaining pair.