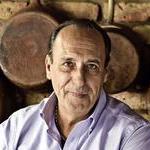 Born in Minori on the Amalfi Coast, Gennaro Contaldo is one of the most respected chefs in London and is widely known as the man who taught Jamie Oliver all he knows about cooking. Gennaro regularly appears as a guest chef on Saturday Kitchen. He has also appeared on Jamie’s Italy, Jamie’s Kitchen, Oliver’s Twist, Jimmy’s Farm, Countryfile: Summer Diaries and Sky One’s Greatest Dishes in the World. He appeared on the BBC Two series Food Poker in 2007.

In 1999 Gennaro opened his own restaurant Passione, on Charlotte Street in London, which was awarded Best Italian Restaurant 2005 in the Tio Pepe ITV Restaurant Awards.

Also famed for his association with Jamie Oliver he has developed menus and trained chefs for Jamie’s UK restaurant chain Jamie’s Italian.