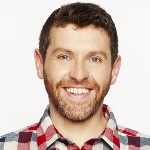 With a distinctive style of storytelling, Dave Gorman has emerged as one of the most unique, original and exciting comedy minds that the UK has produced. Not only is he one of the biggest contemporary comedians and sharpest raconteurs but he is also a hugely successful author.

Gorman’s quirky, often experimental, one man shows usually involve his tales of travelling the world and exploring the intricacies of how we live in it. His first one man ‘documentary style’ show was entitled Reasons to be Cheerful was soon followed by Dave Gorman’s Better World.

His stage show Are You Dave Gorman? originated from a drunken bet that there would be more than 54 Dave Gormans in the world. The show started at the 2000 Edinburgh Film Festival and an extended version then went to the West End, the Melbourne International Comedy Festival, the HBO US Comedy Arts Festival in Aspen and finally to New York.  The BBC made it into the television series The Dave Gorman Collection.

His next shows Dave Gorman’s Important Astrology Experiment and Dave Gorman’s Googlewhack Adventure have dazzled both live and television audiences and broken box office records across the globe. In 2006 America Unchained documented his attempt to travel from the West to the East coast of America without patronising any corporate or chain style businesses. Broadcast on More 4 in 2008 it delivered more than six times the channel’s average viewing figures for the slot.

He recorded three series of his radio show Genius for BBC Radio 4, which were broadcast between 2005 and 2007. The show centred on members of the public submitting suggestions to improve the world – which were then judged by Gorman and a guest.

Dave returned to stand-up in 2009 with a show titled Sit Down, Pedal, Pedal, Stop and Stand Up. The unique feature of this tour was that he cycled 1,563 miles from the southernmost point of Great Britain to the easternmost to the westernmost and then to the northernmost with a gig following each night. His next stand-up Dave Gorman’s Powerpoint Presentation was launched at the 2011 Edinburgh Fringe Festival.

He has written three books based on his successful TV series, Are you Dave Gorman?, Dave Gorman’s Googlewhack Adventure – which reached number one in the Sunday Times non-fiction Bestsellers List in 2004 – and America Unchained.

Dave won two BAFTA Awards as a writer on the Mrs Merton Show (BBC One). He appeared as a team captain on the second series of Rob Brydon’s Annually Retentive (BBC Three) and has appeared on The Daily Show, filming six segments with Jon Stewart (More 4). He has also made guest appearances on shows ranging from The Late Show with David Letterman to Never Mind The Buzzcocks.

Dave is a hard-working touring comic and believes that with great PowerPoint comes great responsibility.