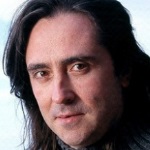 Neil Oliver is an archaeologist, historian, author and broadcaster, His television debut came in 2002 with BBC Two’s Two Men in a Trench, which featured Neil visiting historic British battlefields and recreating the battle situation using state of the art archaeological techniques. In addition to the TV series, Oliver co-wrote the two accompanying books.

He wrote the tie-in book for the Channel 4 documentary Not Forgotten. Neil then became the archaeological and social history expert on Coast, then in the next series he replaced Nicholas Crane as the show’s main presenter and remained as such for the third series, covering the incredible diverse marine and coastal topics of the programme both on and offshore.

2006 saw Neil star in two more documentary series, Channel 4’s The Face of Britain and BBC Two’s Scotland’s History: The Top Ten. As well as this, in August 2006 he appeared on the special ‘Big Royal Dig’ edition of Channel 4’s Time Team, in which he presented the dig at Holyrood House.

He is best known today as a presenter of series, including A History of Scotland, and Vikings, as well as Coast. Neil Oliver served as president of the National Trust for Scotland from 2017 to 2020. In 2021 Neil joined newly founded TV channel GB News. If you wish to write to Neil send post to Neil Oliver, Scotland.