Chris trained in sculpture but rapidly moved onto special effects, applying his passion for Buster Keaton’s measured slapstick first on Alexei Sayles first series, and then progressing on as Head of R & D at Spitting Image Projects where he built up a team of twenty people developing state of the art animatronics and control systems. Over the next five years he went on to work on projects ranging from being the special effects designer on the Damien Hirst Omnibus special, to developing ergonomics based medical products.

In 1998 he co-founded Eleksen, a start-up that developed world leading soft user interface technology, applications including fabric keyboards for Logitech and Smart clothing to control iPods. He led this business from seed funding through to investment by 3i, then Siemens and Logitech, and a valuation of £15M before exiting.

He has won an International IDEA Gold Award for the fabric keyboard designed with IDEO and has 3 items in the permanent collection of the Museum of Modern Art in New York. 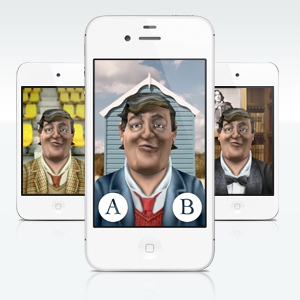 Developing these innovative user interfaces for Orange, Microsoft and Logitech gave Chris an insight for new opportunities in convergent media, and the idea behind HeadcastLab™.

Chris brought together a unique team of partners to create HeadastLab™ technology, which combines his previous experiences and wide networks for creating animated characters and developing telco user interfaces.

The HeadcastLab technology platform allows animation to be created and broadcast instantly to mobiles using 10% of the bandwidth of streaming video, and end users are able to interact with the characters on their handset. The first customer to launch was Stephen Fry, who is also a small shareholder.

Today Chris is part of one of the world’s most innovative online communications, wtv. – a company that has developed its own proprietary video technology platforms and webcasting services and now has customers in more than a hundred countries worldwide.