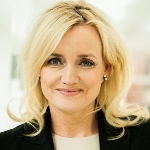 A leading investor and entrepreneur in digital, high-growth, early stage businesses around the world. She has driven many continent-wide initiatives for creating wealth and growth in the European economy. Julie believes that ‘Individual Capitalism’ is the force of the 21st century. She trusts people’s ingenuity to solve the world’s problems at both the macro and micro levels – and to expand prosperity.

Julie is Chairman and CEO of Ariadne Capital, and Founder of EntrepreneurCountry, has been backing European entrepreneurs since 1998 who have built global businesses. After building First Tuesday, which many credit with igniting the Internet generation in Europe in 1998, she pioneered the ‘Entrepreneurs Backing Entrepreneurs’ model for the financing of entrepreneurship in Europe in 2000 by creating Ariadne Capital with a founding group of shareholders who had created some of Europe’s most important firms (BetFair, Coller Capital, Dialog Semiconductor, Easynet, SES Astra, WorldPay and others).

Since 2000, she has backed / advised / invested in at the MVP stage the founders of Espotting, Skype, Monitise, and Zopa, and Ariadne has completed £350 million of transactions. She took EntrepreneurCountry international in September 2013 into 15 regions. Through EntrepreneurCountry, digital Davids and larger established enterprises, Goliaths, can dance. She has written extensively about ‘Ecosystem Economics’™, is a Member of the British Empire, one of INSEAD’s top 50 Alumni where she joined the Board of Directors, Ernst & Young Entrepreneur of the Year, a NXD of Vestergaard (a leader in humanitarian development globally) and a regular commentator on the industry.