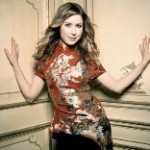 The infant school teacher who picked six-year-old Hayley Westenra out of her class to take the lead singing part of Little Star in the school Christmas play certainly knew what she was doing. After the performance the teacher took her bemused parents aside and informed them their daughter had perfect pitch.

Within ten years of that first star-spot the Christchurch-born prodigy would be one of the world’s most exciting singing sensations, with a crate full of platinum discs; and singing duets with Andrea Bocelli, Jose Carreras and Bryn Terfel to audiences including the Queen, Tony Blair and George Bush.

Her first busking experience was when she found she didn’t have enough lunch money and decided to earn it singing for local shoppers. The experience was an eye-opener for Hayley, who, while still only 11, started staking a pitch and regaling anyone who would listen.

With the help of her mother, Hayley had some CDs run off and would deliver them personally to tourists who had seen her perform at hotels. But demand outstripped their almost unit-by-unit production and soon an impressed friend of her parents offered $5,000 to get a proper batch burned.

Her mother decided to send some CD’s to record companies and was soon asked by Universal Records to come in for meetings. The result was Hayley’s first album, which went triple platinum immediately turning her into New Zealand’s fasting-selling artist.

After a Christmas album (platinum), it was decided that Hayley needed a world stage and so, having signed with Decca in London, she recorded Pure. The record company were confident they had something pretty special on their hands, but even they cannot have expected the reaction to Pure when it was released when Hayley was still just 15.