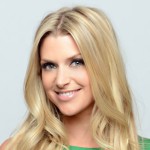 Anna has been performing on stage and screen since her early teens and is best known as a presenter on ITV ‘Breakfast’, including popular children’s show ‘Toonattik’, NTA winner ‘This Morning’, ‘Lorraine’ and ‘Daybreak’. She is also recognised for her shows on Nickelodeon, Disney Channel and CiTV. Recently she competed in ITV’s hit show ‘Splash!’ and became the relationship expert on Celebrity Big Brother’s ‘Bit On The Side’ 2015 on Channel 5.

Aged 15 she joined the girl-group Blush but a year and a half later an opportunity to present on kids TV changed her career path forever. An early reporting role alongside Angellica Bell, Konnie Huq and Naomi Wilkinson lead to a role on the Disney Channel presenting ‘Studio Disney’ on weekdays.

A regular on ITV’s ‘Daybreak’ and ‘Lorraine’, she’s covered everything from celebrity interviews to current affairs. Due to her tenacity and passion for bringing the latest showbiz news to the masses she is considered a highly credible source within the industry. Her entertainment column in ‘Digital Spy’ frequently attracts over 100,000 hits.

Anna is a keen charity supporter and is very proud of her ambassadorial roles for The Princes Trust, The Young Variety Club and mental health charity Mind. In 2009 she gained a Diploma in Counselling and joined Childline as a volunteer counsellor. She writes regular agony aunt columns for both teen magazine ‘Girl Talk’ and health magazine ‘Top Sante’. On ITV’s ‘This Morning’ she runs weekly strands called ‘#AskAnna’ and is a regular counsellor hosting phone-ins with viewers.

She now talks openly about her own battle with severe anxiety and panic attacks. She has hosted various debates surrounding this topic, including the ‘Time for Change’ media conference for Channel 4. A registered Life Coach, Anna has gained a reputable media profile as a ‘mind, body and soul’ campaigner.

Anna is also a versatile voice over artist and credits include Sony, GMTV, ITV, Channel 4, Nickelodeon, MTV and Living TV.