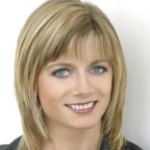 Karen Bowerman is a renowned news presenter, journalist and TV presenter who has worked for Sky, ITV, CNN International and the BBC. Karen has the talent and specialist knowledge to make the issues she covers understandable, informative and entertaining.

Having gained a degree in Theology from Oxford University she began her early career freelancing for her local newspaper in Devon and within months was reporting and presenting for BBC South West. In 1997 she joined Sky News as a producer and soon became a reporter and presenter for them and occasionally presented for CNN International too.

Returning to the BBC in 2000 Karen became the consumer correspondent for the BBC News at One, News at Six and News at Ten whilst also reporting for BBC Radio 4 and 5 Live.

Karen presented an undercover mini-series exposing Rogue Traders, while reporting and presenting for Weekend Watchdog. She presented films for Carlton Country and live outside broadcasts and entertainment stories for BBC One’s Breakfast.

In 2003 she joined the Heaven and Earth Show which she regularly produced. She conceived and co-produced a one-off show for the BBC called Let’s Test the Nation’s Morals.

In 2004 Karen exposed issues of concern for consumers of Northern Ireland with a weekly factual entertainment show, Fairplay. She has also produced and presented investigative films for Newsnight. Bowerman returned to BBC News two years later as the business, personal finance and consumer presenter and currently presents business updates on BBC News 24.

Her infamous claim to fame was interviewing the wrong guy, Guy Goma, on BBC News. Goma was an unsuspecting applicant for an IT job who thought the discussion about Apple Computers was part of the BBC’s interview process. The BBC said Bowerman “deserved a medal” for her handling of the affair.

Since 2007 Karen has also been involved with BBC World’s weekly travel show Fast:track, filming various experiences such as zip lining through the Ecuadorean Andes. She is a member of the British Guild of Travel Writers and was shortlisted for the Travel Broadcast Journalist of the Year Award in the Kingley Travel Press Awards, 2009.

Equally at home with a live audience or in front of the camera, Karen’s corporate client list includes Swiss Re, Eversheds and Airshow TV.