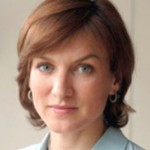 Fiona is a journalist and newsreader. She has presented, hosted and reported for the BBC on numerous programmes including News at Ten, Six O’Clock News, Real Story, Crimewatch and Antiques Roadshow. She has also made high profile appearances on Top Gear and Children in Need where she took her place alongside other newsreaders to perform Velma Kelly’s All that Jazz, to widespread acclaim. She was also punched neatly in the face by Dawn French during a Vicar of Dibley sketch for Comic Relief.

Away from television Fiona is involved in several charities including the optical charity Vision Aid Overseas, and is associated with the feminist charity Women’s Aid, appearing in their ‘What’s it going to take?’ campaign. She was inducted into the Hall of Fame by the NSPCC in 2009 to honour her work on their behalf. Fiona is a vocal feminist, who believes that more women should still be fighting for equality.

A confident and assured presence on television screens, Fiona is a highly professional host and guest speaker, with a wealth of anecdotes and experiences to share.