Rt. Hon Jim Murphy is a former UK Cabinet Minister who has held multiple ministerial portfolios. He was a Member of Parliament from 1997 to 2015. One of the big names of twenty-first century Scottish politics Murphy is a polymath, politician, author, speaker and now publisher. He has chaired a myriad of public and government bodies.

As Leader of the Scottish Labour Party, Murphy famously undertook the high profile ‘Vote No Thanks’ initiative during the referendum campaign, touring Scotland for 100 impromptu public street meetings. He was a member of the leadership team of the all-party Better Together campaign.

Jim’s political life has involved ministerial or shadow ministerial responsibility for employment and benefit reform, Europe, defence, and he’s held the post of Senior Whip. During the 2008 crisis he was one of a small team of Cabinet Ministers who served in Cabinet sub-committee planning real time responses to the financial and banking crisis. Prior to that Jim served as Minister for Civil Contingencies at the Cabinet Office preparing for pandemics and crises.

At the Foreign and Commonwealth Office he was responsible for organising the first ever Papal State visit to the UK. Jim Murphy oversaw the UK’s relations with the EU and all of its Member State Governments. He was responsible for the bilateral links between the UK and Turkey and Central Asia as well as with Russia at a particularly difficult time in relations between the two nations.

At the FCO he co-ordinated the UK’s public diplomacy strategies across the globe and launched ‘Public Diplomacy in a Globalised World’ in Washington, DC. And he successfully navigated the EU’s Lisbon Treaty ratification through Parliament.

Jim’s unique experience offers insights into some of the most pressing issues of our time:
• The Disunited Kingdom – will the UK survive intact?
• Brexit. Will it happen and what will it mean?
• The UK’s foreign policy postures from 1945 until the present day. The strategic positioning of the UK and its relationships with the United States.
• British and European defence policy priorities. After Iraq and Afghanistan what does NATO now mean in Europe?
• British elections – who wins and why? – and the impacts for the rest of the world.
• How British politics has changed since Mrs Thatcher and what it means for people who want to influence Parliament.

Jim Murphy was proud to be voted the most effective Minister in government by politicians of all parties from the House of Commons and House of Lords. He is of course a proud Glaswegian and a Celtic supporter. Jim wanted to read a good book about football but couldn’t find one he liked. So he wrote one and is author of The 10 Football Matches that Changed the World and the One that Didn’t. 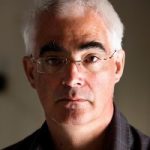