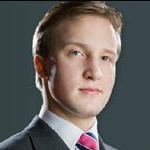 William Hanson is a trusted authority on matters of etiquette, manners & good taste. He rose to prominence as ‘Britain’s Youngest Etiquette Expert’ and has since gone on to
work within Royal and other VIP households and to coach diplomats, businessmen, schools & colleges and advise several multi-national brands such as Bentley, Champagne Bollinger, The National Lottery and Green & Black’s. William is senior tutor for leading etiquette & private household management consultancy firm The English Manner, who were formerly the Lucie Clayton Finishing School.

He is a regular voice on radio, appearing frequently on BBC Radio 5 Live, Heart FM & LBC, as well as numerous other stations. He is a columnist for Daily Telegraph online and is often quoted in the Financial Times, The Sun, Daily Mail and Tatler. William also appears on television, being most frequently seen on BBC Breakfast, CNN, Russell Howard’s Good News and ITV1’s This Morning, and is the resident expert on hit ITV daytime show Let’s Do Lunch with Gino & Mel.

His first book is the best-selling The Bluffer’s Guide to Etiquette, which is a widely used guide and ideal for business ambassadors.

William sees that good manners are not just part of a bygone age but are in fact timeless and he strives to make them accessible and comprehensive to everyone.

After Dinner
Coaching and Development
Culture and Society