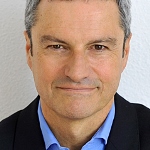 Gavin Esler is an award winning television and radio broadcaster, novelist and journalist. He is the author of five novels and two non-fiction books, The United States of Anger, and most recently Lessons from the Top, a study of how leaders tell stories to make other people follow them. It’s based on personal encounters with a wide variety of leaders, from Bill Clinton and Angela Merkel to Tony Blair, Margaret Thatcher, and even cultural leaders such as Dolly Parton.

Reviewers have been full of praise for Esler’s fiction and story-telling abilities. The writer Bernard Cornwell said his novels are “made luminous with wisdom, sympathy and story telling.” The Guardian commented that Esler’s fiction displays “undoubted sympathy for the human condition and a burning anger, a genuine lyricism, a quick sensitivity and a real understanding of other people.” The Financial Times said Esler’s stories of people in power and the compromises they are forced to make, shows that he “understands the political beast better than anyone.”

Gavin Esler was born in Glasgow, and brought up in Edinburgh and Northern Ireland. His family are descended from German Protestant refugees who fled to safety in Scotland during the religious wars of the early 17th Century. He spent the first three years of his life living with his parents, grandmother and aunts in a three-bedroom council house in Clydebank. The family moved to Edinburgh and Gavin won a scholarship to George Heriot’s School. He planned to study medicine at Edinburgh University and then, to the relief of patients everywhere, made an abrupt switch to English, American and, eventually, Irish literature. After he finished his post-graduate studies he was offered a job on The Scotsman in Edinburgh but turned it down as likely to be a bit dull, preferring instead The Belfast Telegraph. He moved on to the BBC in Belfast during some of the worst of “the Troubles,” and got to know leaders of the IRA and other Republican and loyalist paramilitary groups. On one occasion the leader of a loyalist organisation introduced himself to Esler with the memorable words: “I am speaking to you as someone deeply involved in violence.” It turned out to be an accurate description.

His investigative work on the wrongful convictions of Giuseppe Conlon and his son Gerry led to a campaign which eventually overturned the convictions of the so-called “Guildford Four” and “Maguire Seven” — innocent Irishmen and women convicted of bombing offences on the basis on non-existent or unreliable “evidence.” Their stories eventually became the basis of the film, In the Name of the Father.

Esler moved on to become the BBC’s Chief North America Correspondent, based in Washington and covering the Bush and Clinton White House. He visited 48 of the 50 states but somehow missed out on Wisconsin and North Dakota. His first encounter with Bill Clinton in 1991 led him to believe that the then Governor of Arkansas might indeed become President of the United States some day – a belief somewhat dented when a Democratic party official described Clinton to Esler as “Oh, you mean Governor Zipper Problem.”

He then reported from countries as diverse as China, Peru, Argentina, Cuba, Brazil, Russia, Jordan, Iran, Saudia Arabia and from the Aleutian Islands, as well as all across Europe. He won a Royal Television Society award for a TV documentary about Alaska and a Sony Gold award for a BBC radio investigation into the case of Sami al Hajj, who was detained without charge in Guantanamo bay, but released shortly after the radio programme was broadcast.

His novels – Loyalties, Deep Blue, The Blood Brother, and A Scandalous Man – were followed by the paperback publication of Powerplay, a tense drama centred on a profound disagreement between the governments in Washington and London over terrorism. The Vice President of the United States travels to Britain to try to patch things up, but then goes missing, an event which signals the end of the so-called US-UK “special relationship,” and creates particular problems for the narrator, Britain’s ambassador in the United States.

His non-fiction book on leaders and leadership details how all great leaders are also great story-tellers. From Moses and Jesus in the Bible to Churchill and leaders in business, politics and cultural life in the 21st century, Lessons from the Top explores the three stories that every leader tells: Who Am I? Who Are We? And Where Will My Leadership Take Us. The book has led to a separate career lecturing audiences as diverse as business groups, university business schools and literature departments, plus military and other organisations interested in leadership and communications.