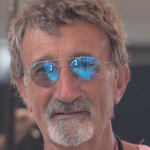 Eddie Jordan is one of Formula 1’s most charismatic personalities, former racing driver, team owner, BBC F1 analyst, and entrepreneur. In a career which included running the Jordan F1 team, from 1991 until he sold it in 2004, he established a reputation as one of the sport’s most maverick senior figures.

Born in Ireland in 1948, Jordan grew up intending to become a dentist but instead joined the Bank of Ireland as a clerk. During a strike in Dublin he went to work in Jersey where he saw kart racing for the first time. On his return to Dublin, he bought a kart and began racing. In his second year of racing, 1971, he entered the Irish Kart Championship and he won.

Jordan moved on to compete in the Formula Ford Championship for two years and broke both his legs in a crash. He switched to Formula Atlantic, won three races and clinched the Irish Formula Atlantic Championship in 1978.  The following year Eddie raced alongside Stefan Johansson in British Formula Three, calling themselves ‘Team Ireland’.

At the end of ’79 Jordan founded his first team, Eddie Jordan Racing. The team finished second to Ayrton Senna in British F3 and in 1987 the team won the British Formula Three Championship with Johnny Herbert driving.

In 1989 the Jordan F3000 team dominated the season with Jean Alesi winning the championship. Jordan founded Jordan Grand Prix in 1991. The team punched above their weight during its debut season and Eddie gave a young Michael Schumacher his F1 debut. After just one race for the team, Schumacher was lured away to rivals Benetton.

In 1998 the team achieved its best ever result when Damon Hill and Ralf Schumacher finished first and second at the Belgian Grand Prix. In 1999 Jordan achieved their F1 zenith when Heinz Harald Frentzen became a genuine contender for the championship, ultimately finishing third, the best placing ever of a Jordan driver.

After losing a Honda engine partnership deal to the BAR, now Honda F1, team in 2002 and numerous difficulties within the team, Jordan was forced to switch to expensive Cosworth engines. The burden of this plus DHL withdrawing their sponsorship and Benson and Hedges reducing theirs resulted in a difficult year in 2003. Despite this, Jordan delivered an improbable race win in Brazil 2003 courtesy of Giancarlo Fisichella, the first for Fisichella and the last F1 victory for the Ford Motor Company and the Jordan team.

EJ’s famous charisma had enabled him to finesse sponsorship deals without which Jordan Grand Prix would almost certainly have gone the way of Prost Grand Prix or Arrows. At the end it all proved too much and a buyer was found in Midland Group financed by wealthy Canadian businessman Alex Schnaider. The dream of Eddie Jordan, his pride and joy, the ‘rock and roll team’, were lost forever to the hard realities of modern Formula 1.

Another side of Eddie Jordan is seen in his philanthropic interests, notably as patron of the child cancer charity, CLIC Sargent and The Amber Foundation for the young homeless. In addition, as a keen drummer, Eddie’s band – ‘Eddie & the Robbers’ – play at many charitable events.