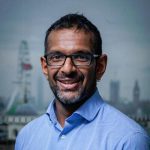 Professor Anand Menon is a leading analyst of British and European politics, and one of the UK’s foremost commentators on Brexit and the future of the EU.

He is Director of UK in a Changing Europe, a think tank dedicated to high-quality, impartial research into the impact of EU policies, attitudes towards the EU, and the evolving relationship between the EU and the United Kingdom.

In his latest book, Brexit and British Politics he makes the case that Brexit is the result of long-term trends that have been in motion for decades. To fully grasp the implications of Brexit for Britain and Europe, he argues it is crucial to place it in this wider context.

He provides expert insights on the immediate issues surrounding Brexit:

What are the key variables to watch?
What can the UK and EU realistically expect from each other in the negotiations?
What are the repercussions for trade and regulation?

Placing Brexit in the context of long-term political, economic and social trends, Anand can help us to understand much more about the longer-term direction of Britain and the European Union.