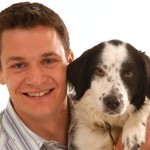 Joe is known for his appearances on the highly successful BBC One programme Vets in Practice. The series followed his life and career starting with Vet School whilst at university, and afterwards on Vets In Practice when he qualified as a vet. The programme scooped the highly coveted ‘Best Documentary Award’ at the TV Awards and attracted significant viewing figures for eleven years.

Joe has also been the resident vet on BBC One’s Blue Peter, making regular appearances both in the studio and on location. He wrote for the website, featured in the Blue Peter Magazine and has even taken part in the show’s annual pantomime.

Television appearances include Through the Keyhole, Celebrity Bargain Hunt, Holiday, Watchdog and This Morning amongst others. He was a presenter on the ITV series What’s Up Dog? – appearing with other experts on an outdoor roadshow which toured the country offering advice to dog owners. Joe can be heard on children’s radio, featuring regularly on the BBC Radio 7 programme Big Toe Radio as well as BBC Radio 4’s Go For It.

Other roles have seen Joe filming at Disney World in Florida, to introduce the Walt Disney Holiday Video for the 2003 season and in December 2002 Joe took the lead role as Aladdin in pantomime.

Joe is an accomplished writer, including It Really Does Happen to a Vet (1999) and regular columns. He has written a series of articles for The Mail on Sunday in their Pet Supplement and forewords to a number of books. He is now concentrating his efforts into children’s fiction.

He has fronted a number of corporate campaigns and videos, and hosts skills and career workshops around the country for aspiring vets. He is asked to judge pet competitions, both big and small, and makes regular appearances for the Kennel Club, to encourage responsible pet ownership. He is also helping to promote The Missing Pets Bureau.

As well as an animal lover, he has a great interest in skiing, surfing and mountain boarding (for which he held the title of UK Champion), and he developed an innovative mountain board ‘No Sno’. He makes regular personal appearances and is in demand for his knowledge of animals. He successfully combines his work as a veterinary surgeon in Oxfordshire with the demands of the media and public speaking.