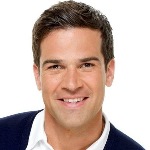 In the more than three and a half years Gethin Jones presented BBC TV’s Blue Peter he visited more than thirty countries. He flew with the Red Arrows, barely survived jungle of Bolivia, he had to dodge snappy alligators in rural Louisiana, but then again, he did learn in Japan to fight as a samurai warrior. And he became the first civilian to complete the Royal Marine Commando 30 mile Yomp. All this plus he’s a violinist, pianist, and sportsman with degrees in both economics and geography. Following Blue Peter Gethin moved on to present documentary series Crime and Punishment alongside Louise Minchin, as well as being a full-time reporter on ITVs Daybreak. And he’s appeared on Gethin Jones’ Danger Hunters for Virgin1 and Police, Camera, Action for ITV, quiz show Sell Me the Answer, and the prime-time Holding Out For a Hero.

Familiar in both the UK and the US Gethin is a now perennial favourite go-to-guy for hosting television shows as well as a great live events host. He has recently settled in to his regular breakfast radio show on the new Bauer Network station, Hits Radio, and is still passionately involved in his own charitable foundation, Nai, where they work hard to provide essential equipment in to aid children with autism, a charity Gethin established in honour of his own nephew.