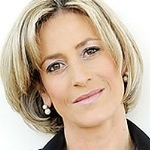 Emily Maitlis presents the BBC’s flagship current affairs flagship, Newsnight, on BBC 2. She began her TV career in Hong Kong with NBC Asia before moving to Sky. Today she is part of the BBC Election Team in the United Kingdom, in the United States, and in Europe. She covered eighteen months of the US Presidential primaries and the campaign and has interviewed Donald Trump more than once, as well as the last five British Prime Ministers.

Emily’s documentary Expenses: The Scandal That Changed Britain investigated the expenses scandal that shook the British political landscape a decade ago and the impact it had on public trust that is still very much relevant to politics today.

In 2019 Emily Maitlis was named as the Network Presenter of the Year at the RTS Television Journalism Awards. She previously won the London Press Club ‘Broadcast Journalist of the Year’ Award for her work on Newsnight and the Wincott Business Award for her documentary with Mark Zuckerberg.

Emily’s book Airhead: The Imperfect Art of Making News was published in April 2019. She’s also written for GQ, The Sunday Times and the Spectator Magazine as well as The Guardian, the Evening Standard and the New Statesman.