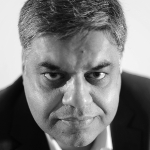 Ajaz Ahmed is Chief Provocateur at Cut the Cr*p.

Ajaz is the entrepreneur who founded Freeserve, the UK’s first billion-Pound internet business. His eureka moment came in early digital days when no-one in his local PC World was able to tell him how to get onto the internet. So he invented Freeserve – and Dixons launched the brand in September 1998 becoming the UK’s largest ISP in just three short months. It floated just nine months later at a market cap of £1.5bn and entered the FT 100 soon after, in March 2000 it had a market cap of £9bn. Ultimately Freeserve was sold to France Telecom for more than one and a half billion pounds. From that adventure Ajaz learned a lot of business lessons!

Ajaz was one of the three founding executives to launch the business, seeing it through flotation and the £1.6bn sale to Wanadoo. He was named Number One in the e-commerce Hall of Fame by Business Age Magazine. Internet Magazine placed him in the Top 50 movers and shakers in the UK internet sector, and the Asian community also recognised him with a Special Achievement Award.

From the Freeserve adventure Ajaz learned a lot of business lessons and he speaks to motivate, to inform and to help. Cut the Cr*p is a brand name that now articulates Ajaz’s whole philosophy! He had become bored and fed up listening to bogus experts and gurus: ‘people who never get to the point or leave you with any wisdom’. The Ajaz Ahmed approach to business speaking is different and it’s memorable, focusing on motivation and wisdom and not on the personality. It’s all about the valuable and usable lessons from both before and after Freeserve.

It’s no-nonsense. There’s no jargon. And it’s straight to the point. Ajaz cuts through the cra*p!