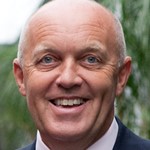 Chris Corbin is one of the most inspirational examples of entrepreneurship and determination on the speaking circuit today. He firmly believes that it is within the grasp of anyone to build a successful life for their family.

He started his career as a medical sales representative with a flair for success. After completing a business studies degree he joined the pharmaceutical industry as a medical representative. By the age of 27 he was sales manager at May & Baker and moved on to have successful roles with Astra, Fisons and Parke Davis.

His career came crashing down after a management change resulted in redundancy. His first marriage had failed, he was in the midst of an acrimonious divorce and circumstances had brought him to a low point in life. Yet, sitting on the ‘third step’ of his mother’s house with just £20 in his pocket life offered him the opportunity which sparked his rapid rise to success. During a chance conversation with an ex colleague Chris spotted the chance to say ‘I can do that’, determined to win the contract he inspired confidence and won the deal.

In 1996, Chris founded his own company with the support of his wife Samantha.  They converted their spare room in Leicestershire into an office, hired 60 cars on credit and started recruiting; and thus Ashfield Healthcare, a contract sales outsourcing company, was born. Six months later they won a contract with Sankyo and moved into their first 1,000 square foot office in Ashby de la Zouch. Continued success resulted in Ashfield Healthcare being bought by United Drug in 2000. A year later, Chris was appointed as a Director of United Drug.

In 2002, Ashfield House, a multi-million pound office and training centre was opened close to where it all began just 7 years earlier. Later that year Chris and the company were recognised at the Leicestershire Business Awards, being awarded both the Business Personality of the Year and the Business of the Year Awards.

2007 saw a merger with In2Focus the specialist sales force effectiveness and business research division being a perfect compliment to Ashfield Healthcare’s established services.  The newly formed Ashfield In2Focus now employed over 1,500 people with a turnover of £83 million. Since then the company has continued to thrive and is the market leader in its field. It has expanded into Ireland, USA and Japan.

Chris speaks honestly and advisedly, his talks are focussed on what they don’t teach you at business school, the pitfalls and how to find the determination to succeed in the face of overwhelming odds. The huge respect this inspiring, witty and passionate speaker invokes is simply amazing.