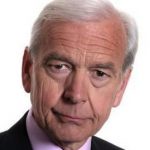 John Humphrys was host and interviewer on the BBC Radio 4 flagship morning news Today programme from 1987 to 2019. Between 1981 and 1987, following his time as a BBC foreign correspondent, he was prime presenter on the Nine O’Clock News, the flagship BBC evening news television programme. And, John Humphrys is the current host of the celebrated long-running BBC Two Mastermind. His reputation as an interviewer is as a probing and tenacious interrogator.

John has authored a number of books, including Lost for Words, in which he criticises what he perceives as the misuse of English in contemporary life. His further titles include Beyond Words, Devil’s Advocate, The Great Food Gamble and In God We Doubt, confessions of a failed atheist.

John’s astonishing depth and breadth of experience as a host and moderator makes him a powerful and steady-handed presence facilitating, on panels, and as a compelling public speaker.