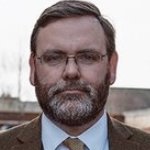 Born in Edinburgh, Paul Laidlaw matriculated in astrophysics with the intention of eventually working for NASA, though ended up with a degree in mathematics and running his own business, Laidlaw Auctioneers and Valuers and is a big part of the BBC on-screen TV team presenting the incredibly successful Antiques Road Trip and Bargain Hunt.

Paul’s vision was to totally transform the perception of the antique auctioneers from the Victorian age into the digital future. At the same time Paul understood and harnessed the idea of auction as theatre – a thrilling and dramatic experience – as if to combine shopping with a day out at the races!

Originally Paul appeared as auctioneer in just one edition of Bargain Hunt and made the competing teams record profits. The show soon asked him to come back and do a screen test in order to become a resident expert on the show. Paul says that his mum told him to give things a go rather than have regrets about lost opportunities! He joined the show and is still there on our screens today. He holds the record for the highest profit ever achieved on any BBC antiques programme.

Specialist Speakers is nominated by Paul Laidlaw agent for speaking and presentation in both in-person and virtual settings.