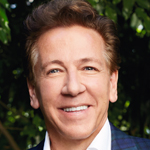 Ross King’s career all began when he made his stage debut in Scotland on stage at the age of four. By fifteen he had made his first radio broadcast. His TV debut came just two years later.

Today Ross is seen daily by millions of people across the UK and Europe on ITV shows Good Morning Britain and on Lorraine as US Correspondent working from Los Angeles and reporting on all things show biz and Hollywood. He has covered the Oscars, the Emmys, the Tonys, Golden Globes, and the Grammy Awards. But Ross isn’t just about show business – he reports too on hard news including some of the most dramatic American stories of recent years.

With a string of movie, TV and radio credits to his name film credits to his name Ross has now also achieved a great lifetime ambition by co-hosting the American Weekly Top 40 countdown alongside legendary DJ Rick Dees. Ross King’s radio show The King in LA is now syndicated across the UK and Ross is now the voice of American Express.

In 2018 Ross was awarded the MBE from Her Majesty The Queen for services to broadcasting, the arts, and charity.

Ross King is available for booking via Specialist Speakers for both physical and virtual hosting.