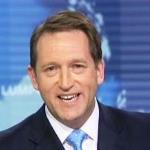 Despite the Irish surname Adrian Finighan is, in fact, Welsh. Born in Newport, Monmouthshire in 1964 he trained as a journalist in industrial South Wales in the mid 80′s and now works as a presenter and reporter for Al Jazeera English (AJE) reporting from London.

In 1988 he joined the BBC as a radio producer and presenter. He launched the local radio network’s first weekday evening regional phone-in programme which was subsequently rolled out to every English BBC region.

He graduated to national radio news reading in 1991 on BBC Radio 1 then 2 before moving to television and the BBC’s Business Unit in 1994 to front the World Business Report on BBC World. After a short spell as North America Business Correspondent he became one of BBC World’s regular news anchors in 1998.

Adrian presented evening bulletins at BBC World, fronting the equivalent of the ‘ten o’clock news’ across Europe and anchoring the London end of an evening news show carried by BBC America, CBC Newsworld in Canada and over 200 PBS stations in the US. He left the BBC in 2005, moving on to CNN International. Presenting live news and business programmes from CNN International’s European headquarters in London, he also sub-anchored on location as required.

In 2010 he joined Al Jazeera English as a presenter and reporter, an opportunity he described as ‘too good to miss’.  The channel has been in the spotlight and attracted much media coverage as its search for unbiased, real news attracts viewers in ever growing numbers. For its reporting the previous year Al Jazeera English became the UK’s Royal Television Society News Channel of the Year 2012, the only non-domestic broadcaster to have been awarded the honour.

Adrian’s great strength is his ability to marry authority with warmth. His relaxed, intelligent delivery and wry sense of humour have won him many fans and attracted thousands of new viewers.  In the past Adrian has put his voice to good use, providing commentary for corporate films, working as the announcer for various BBC TV and radio programmes and being the ‘voice’ of BBC World.

Adrian won a Eutelsat Hotbird Award, with BBC World for best news coverage for a bulletin in which he interviewed John Simpson (World Affairs Editor) immediately after his ‘liberation’ of Kabul.