As the world waits to see if Donald Trump becomes the Republican candidate for 2024, Michael Wolff gives audiences his assessment of the likelihood. Michael is famously the in-depth chronicler of the Donald Trump presidency. In Trump Fire and Fury: Inside the Trump White House, the first book in his trilogy, he tells the inside story of the election victory of 2016. The New York Times number one bestseller sold more than five million copies. In the second book, Siege: Trump Under Fire we are privy to a world of chaos at the heart of the most powerful political office on earth.

Following the election of 2020 Donald Trump declared, ‘We won. Won in a landslide. This was a landslide.’ Michael Wolff takes us through that election, and its aftermath, culminating in the January assault on the Capitol in Landslide the final days of the Trump presidency. Michael Wolff’s views on the chances for a Trump run in 2024 figure significantly in his recent work. His guest essay The Chaos Inside Donald Trump’s Mind was published in the New York Times on 15 November 2022. 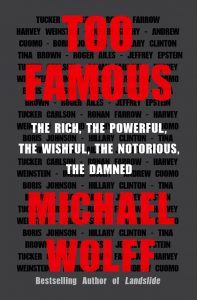 We are now delighted to offer Michael Wolff in conversation with Lord Michael Dobbs creator of House of Cards. The Two Michaels deliver insight into the extraordinary contemporary politics of our time on both sides of the Atlantic.