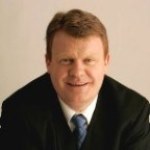 Alan Fisher is a Scottish broadcast journalist currently working for Al Jazeera English from their Washington DC News Centre. Born and raised in Motherwell he studied journalism at Napier College of Commerce and Technology, Edinburgh. He started his career on radio with Moray Firth Radio in Inverness followed by Northsound Radio in Aberdeen.

Alan’s television career began with the evening news programme North Tonight, for Grampian Television, where he stayed for six years. He then became a regular presenter of Scotland Today with Scottish Television. When GMTV took over the Breakfast franchise on ITV, he was appointed Ireland correspondent setting up its bureau in Belfast. He was transferred to London in 1995 on his appointment as Senior News Correspondent. In 1999, he was promoted to Chief Correspondent.

He moved to Al Jazeera English before its launch and has reported from across the globe including Afghanistan, Israel, Lebanon, Pakistan and Europe. His reports were part of the International News Emmy nominations which Al Jazeera English received for its coverage in Georgia and Gaza. He was part of the team covering the Egyptian Revolution for which the channel won a prestigious Peabody Award. In 2011, he was appointed Senior Correspondent for Al Jazeera based in the Washington DC News Centre. In October 2012, he co-anchored the station’s coverage of the US Presidential and vice-Presidential debates.

Alan is a columnist with the highly regarded on-line current affairs magazine Scottish Review and is a patron of the Young UK Programme which aims to stretch the minds and broaden the horizons of young people. For his work with the programme, he was awarded The Inveramsay Medal.

He is a former trustee and member of the board of the charity The Institute of Contemporary Scotland. In November 2010, he earned a Master of Arts Degree (MA) in Mass Communications from the University of Leicester and has contributed a chapter to an academic book on the reporting of the 2011 revolutions in North Africa and the Middle East – known collectively as ‘The Arab Spring’.

A keen cyclist, he has raised thousands of pounds for the British Heart Foundation.