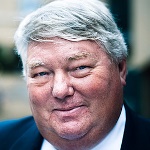 Brian Taylor is BBC Scotland’s Political Editor. He has covered Scottish politics since Braveheart was a boy. Before joining the BBC in 1985, Brian worked in newspapers for eight years including six years as a lobby correspondent at Westminster. He was schooled in Dundee and graduated from the University of St Andrews where he edited the student newspaper, played golf – and studied English.

These days, Brian covers Scottish politics for all BBC outlets, in Scotland and across the network.
Brian is a frequent contributor to other BBC programmes, including comedy shows. His wider interests include literature, the arts, football and golf.

Brian has written two books on Scotland’s new Parliament and co-written eight more. In addition, he has lectured on politics and identity round the globe. Brian has three honorary degrees and is an honorary professor at the University of Glasgow.

In terms of speaking, Brian can deliver an after-dinner comedy turn – with a news slant – or a serious analysis of contemporary politics. Or, indeed, both.

Brian has a Twitter account which has gained a degree of notoriety in that he never tweets. He promises to break that habit on the day that his beloved Dundee United win the European Champions League. Which will be any day now.