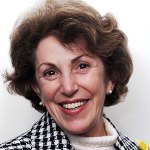 Edwina Currie was born in Liverpool and graduated from Oxford and London Universities. She taught economics and economic history and was a tutor for the Open University. She worked as a Birmingham City Councillor (1975-1986), Chairman of Central Birmingham Health Authority and served as MP for South Derbyshire (1983-1997).Following her time in public office she has become a respected author and broadcaster.

In 1985 Edwina was aide to Sir Keith Joseph at the Department of Education and Science, becoming a government minister at the DHSS a year later under Margaret Thatcher. She resigned after warning about food safety in eggs. John Major invited her to re-join the government in 1992 but she declined and lost her seat in the 1997 General Election.

A pro-European, in June 1994 she was an unsuccessful candidate for the European Parliament for Beds and Milton Keynes. Edwina was Chairman of the Conservative Group for Europe (1995-1997) and was Vice Chairman of the all-party European Movement (1995-1999).

In 1988 Edwina Currie was runner-up to Mrs Thatcher in BBC Radio 4’s Woman of the Year poll and came sixth the following year. In 1990 Curry was chosen as Campaigner of the Year in The Spectator Parliamentarian of the Year Awards for her work on homosexual equality.

She has written numerous books, including ‘Life Lines’ on her time as Health Minister, What Women Want on women’s roles and Three Line Quips, witticisms from the House of Commons. Her first novel A Parliamentary Affair went to the top of the best-seller lists and sold over 250,000 copies. A further four novels have followed: A Woman’s Place, She’s Leaving Home, The Ambassador and Chasing Men which was published in 2000.

For five years Edwina presented her own successful radio programme Late Night Currie for BBC Radio 5 Live.  She has also presented various TV programmes including Sunday Supplement (Central TV), Espresso (Channel 5), Menu from Heaven (ITV) and What Now (BBC).    She has been the subject of several full-length documentary profiles including The Other Half, Channel 4 Dispatches and Vanessa’s Day with… . She has made appearances on celebrity shows such as Celebrity Mastermind, Weakest Link and Strictly Come Dancing.

Edwina Currie’s tweet of 16 December 2020 to Paul Joseph Watson was deemed by many authorities to be ‘remarkable’.