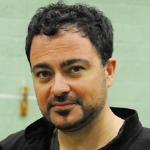 Chris Crudelli is a TV presenter, cultural explorer, best-selling author and internationally recognised kung fu master. His self-penned series for the BBC Mind, Body & Kick Ass Moves was a smash hit, becoming the most widely distributed documentary in BBC TV history after it was broadcast in over 180 countries worldwide.

His book The Way of The Warrior was published in 2008 and sold well in the UK and US with his TV shows breaking new records in both countries (broadcast on Discovery Travel & Leisure and Fox FSN). The Sunday Telegraph labelled Chris as “the most engaging personality on British TV” and The Telegraph described him as “one of the top ten martial arts practitioners alive today”. Chris is an inspiring teacher and speaker who has taught thousands around the world.

Growing up in Birmingham, Chris had witnessed a number of violent crimes by the age of seven which inspired him to take up Martial Arts. His passion for the Arts soon developed and as a teenager he moved to China in order to study full time with the world’s most revered masters. He travelled all over Asia for over ten years studying and developing his knowledge in the Arts.

He became the first Westerner to  develop a Chinese-style kung fu on Chinese soil – Jiufamen. It is taught at Chris’ network of schools in London and through regular workshops around the country. Chris has a taught a simplified version to police organisations, special forces and military personnel worldwide.

Chris is very enthusiastic about the practical application of such skills to every day life.Martial Arts are disciplines of problem solving for body and mind; they can help you explore aggression, competitiveness, fear and how you respond to challenges. He leads groups on training adventures specifically to find their mental and physical limits and, with Chris’s help, push beyond them. They have provided life-changing experiences for many attendees.

Chris says “There’s more to Martial Arts than punching and kicking”. His travel-inspired teaching and speeches lead audiences to face challenges head-on, whilst providing humorous and kick ass anecdotes along the journey!  He is living proof that Martial Arts, when taught well, are good for you.