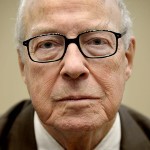 Dr Hans Blix is widely known as a pre-eminent world statesman in the advancement of the peaceful uses of nuclear energy.

Dr Blix served as Director General of the International Atomic Energy Agency, 1981-1997, and is now Director General-Emeritus. In 2000 he was appointed by the UN Secretary-General to head the United Nations Monitoring, Verification and Inspection Commission (UNMOVIC).

Born in Sweden, Dr Blix studied at the University of Uppsala, Columbia University and Cambridge University, where he received his PhD. At Stockholm University he attained a doctorate in law and served as a professor in international law.

From 1963 to 1976 he served in the Swedish foreign ministry and in 1978 became Sweden’s foreign minister. Dr Blix has written several books on subjects associated with international and constitutional law.

In 1988 Blix received the Henry DeWolf  Smyth Nuclear Statesman Award and in 1997 he was awarded the Gold Medal (for distinguished service in the field of nuclear affairs) by the Uranium Institute, the predecessor to the World Nuclear Association.

In 2008 his book Why Nuclear Disarmament Matters was published by The MIT Press. In February 2010, the Government of the United Arab Emirates announced that Blix will be the head of an advisory board for its nuclear power program.