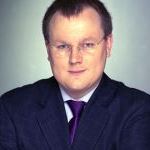 Declan Curry has been a business and economics journalist for more than twenty years. He has worked for the BBC and commercial radio, with his broadcasts aired in in the United States and Australia. His reporting has been published in newspapers and business magazines in the UK, Ireland and the USA.

Declan has extensive experience of chairing conferences and seminars. This includes sessions at the Global Economic Symposium in Germany, Turkey and Brazil, and the World Economic Forum in Switzerland. He is also much in demand as an awards host and public speaker.

Declan was business presenter for BBC One’s Breakfast for seven years. He also presented BBC Two’s Working Lunch. For almost a decade Declan’s broadcasts also appeared in the US each morning, providing a live report for the US network ABC.

He spent four years as a regular columnist for Investors Chronicle magazine, and has been published in a wide range of titles in the UK, Ireland and the United States. He has written more times than he can remember for the BBC News website. Declan is now back on LBC, commentating each morning on the day’s business news during Nick Ferrari’s breakfast programme.