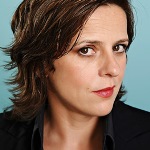 Rhona Cameron was born in Dundee and raised in Mussleburgh, just outside Edinburgh, where she was crowned Rosebud Princess 1969, at the tender age of four.

She started stand-up in the early nineties, winning the So You Think You’re Funny? new act award in 1992. The following year she made her Edinburgh Fringe debut and in 1995 supported Jack Dee on tour. She has been touring on and off in her own right ever since.

In 2002 she joined the West End cast of The Vagina Monologues, before heading off to the Australian jungle for the first series of I’m a Celebrity… Get Me Out of Here!. That appearance led to a job hosting the ITV game show Russian Roulette the same year. The following year, she played the first ever female narrator in The Rocky Horror Show on tour and then in the West End.

In 2003 she wrote her first book Nineteen Seventy-Nine: A Big Year in a Small Town, an autobiographical account of a year in her childhood in Mussleburgh. Her debut novel The Naked Drinking Club was published by Ebury Press in 2008.

In 2008 she returned to the stage with her One Nighter tour and the following year appeared in Celebrity Wife Swap with her partner.  Since then she has been busy with writing projects for television and film.