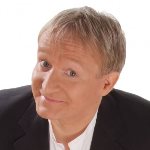 Steve Nallon, was the leading impressionist on the award winning Spitting Image series and is widely recognised as one of Britain’s most entertaining raconteur impressionists and satirists. His recent television and radio appearances include Celebrity Special: The Weakest Link, Call My Bluff, Alistair McGowan’s Big Impression, Night of a Thousand Faces and First Impressions. With an ever-growing repertoire of voices Steve’s brilliantly funny and unique after dinner act takes his audience on a comic tour through the latest current affairs.

The man that inspired Rory Bremner and beloved of politicians and public eye celebrities during the years of Spitting Image, Steve Nallon is so often in our ears as a voice-over artist yet so rarely on the screen these days.

What truly sets Steve apart is his ability to tailor his scripts to include characteristics of key audience members, providing a unique evening of comedy, not easily forgotten.

Steve’s recent performances have ranged from as intimate as fourteen to Gala Dinners of well over two thousand.