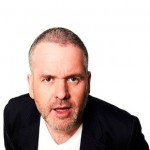 Chris Moyles joined BBC Radio 1 in 1997 after serving his radio apprenticeship across a number of leading regional radio stations. He left the show in September 2012, having built an audience of over 8 million listeners and having won critical acclaim in an unrivalled way; including 6 Sony’s and 2 GQ ‘Radio Personality of the Year’ Awards. He currently holds the record of the longest ever serving Breakfast Show host on Radio 1.

In 2011, Chris (alongside co-presenter Comedy Dave) broke the world record for the longest radio show ever, broadcasting nonstop for 52 hours and raising over £2.8million for Comic Relief. This huge effort (which was watched online by a record-breaking 3.8 million people) followed the Comic Relief climb of Kilimanjaro in 2009 where Chris, alongside a team including Gary Barlow and Cheryl Cole, raised in excess of £3.5million for the charity.

Outside of the radio studio, Chris has built a hugely successful multi-platform career encompassing books, albums, theatre and television:

His first book The Gospel According to Chris Moyles’ stormed straight in to the Sunday Times bestseller list in both hardback and paperback, where it remained for a number of months. His follow up, ‘The Difficult Second Book’ repeated the feat.

His much loved parody songs from the Breakfast Show have garnered legions of fans both from his listeners and the artists he is parodying. In 2004 he knocked U2 off the top of the Official Download Chart with his single ‘Dogz Don’t Kill People (Wabbits Do)’. This went on to become the fastest selling download single of all time in the UK. Further parodies followed and in 2009, ‘The Parody Album’ was released by Sony Music/Radio 1. The much anticipated follow up will be released in the autumn of 2012.

Chris co-devised ‘Chris Moyles Quiz Night’ for Channel 4 which has just completed its 5th series. In 2011 he presented ‘Love Machine’ for Sky Living and he has recently finished filming the second series. Other television credits include: ‘Live with Chris Moyles’, ‘The Chris Moyles Show’, ‘The Big Breakfast’, ‘Big Brother’s Big Mouth’, ‘Hotel Babylon’, ‘Top Gear’, ‘Never Mind the Buzzcocks’, ‘8 Out of 10 Cats’ and ‘Who do you think you are?’.

In 2006 he starred in The X Factor: Battle of the Stars, wowing the British public with his singing voice. Despite being cruelly knocked out at the semi-final stage of the show, his voice was good enough for Lord Lloyd Webber to take note and, when ‘Jesus Christ Superstar’ was being cast he knew exactly what he wanted for King Herod! Chris can currently be seen performing a nationwide Arena tour of the highly acclaimed production alongside Tim Minchin and Melanie C.