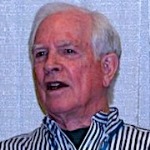 Former astronaut Dr David Scott commanded Apollo 15, described as “the most complex mission in the history of exploration”. He was the seventh man to walk on the Moon.

After West Point and flying school David Scott spent four years as a fighter pilot based in Holland. He then went on to study at the Massachusetts Institute of Technology before attending Test Pilot School.

David’s first NASA space mission was with Gemini 8 in 1966, achieving the first docking in space under the command of Neil Armstrong. David Scott returned to space with Apollo 9 in 1969, a mission which tested the lunar equipment. David then commanded the Apollo 15 mission, the first ‘J Mission’, the beginning of the scientific exploration of the Moon. Apollo 15 included the first motorised journey on the Moon.

After his successful missions into space, David became Director of the Flight Research Base operating between Houston, Texas and Moscow. David Scott’s most recent adventure was the establishment of a satellite recovery business.

During the early days of the space program there were almost insuperable challenges to overcome and David speaks about the enormous problems faced, the overall Space Program, the Race to the Moon and now the Future in Space in this, the year of Apollo50.

David Scott was Technical Advisor to the director of the movie Apollo 13.

Please note that we are not able to process interview enquiries or mail.