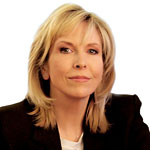 Anne Mackenzie was born on the Island of Lewis in the Outer Hebrides and educated at Glasgow University. She began her career at Grampian Television and after a spell as news reporter began to present news, current affairs and political programmes winning a BAFTA for her work on the North Tonight nightly news. Anne moved to BBC Scotland in 1995, presenting Reporting Scotland and Good Morning Scotland.

In 1999 Anne returned to Scotland to launch the new Newsnight Scotland programme remaining with Newsnight until 2007. She fronted BBC Scotland’s election programming for nearly a decade.