Sir Robin Knox-Johnston was the first person to complete a single-handed non-stop circumnavigation of the globe between June 1968 and April 1969 in Suhaili as winner of the Golden Globe Race.

The eldest of four brothers, RKJ was born in 1939 in Putney, London. He was schooled at Berkhamsted in Hertfordshire, the same school as Bill Tilman and Graham Greene and was a team mate of Michael Meacher MP. His main interests were long distance running, swimming and boxing. Not being very good at team sports he often slipped away to his Grandparents’ house to work on a 1927 Austin 7 car instead.

He went to sea in the Merchant Navy in 1957 as a deck officer, something which ignited his passion for sailing. He skippered Condor to line honours in two legs of the 1977/8 Whitbread Race, co-skippered Enza New Zealand with the late Peter Blake to take the Jules Verne Trophy in 1994 for the fastest circumnavigation of the world, and completed the Velux5Oceans Solo Around the World Race in 4th position in 2006/7 at the age of 68. 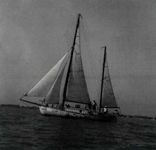 In 1992 he became President of the Sail Training Association, a youth development organisation which operated two topsail schooners Sir Winston Churchill and Malcolm Miller and also organised the annual Tall Ships races. By the time he retired in 2001 £11 million had been raised to replace these two vessels with two larger brigs Prince William and Stavros Niarchos.

He was Knighted in 1995, and has uniquely been the UK’s Yachtsman of the Year 3 times. He was ISAF Sailor of the Year with Peter Blake in 1994 and became one of the first 6 inductees into the ISAF Hall of Fame in 2007.

RKJ was appointed to the Sports Lottery Panel at its inception in 1995, initially distributing £250 million a year, and from 1999 to 2002 served as a member of the English Sports Council.

He married childhood sweetheart, Suzanne, in 1962 with their daughter, Sara, being born in Bombay in 1963. Suzanne passed away in 2003. Robin’s interests are predominantly sailing, exploring by boat, maritime history, the marine environment, youth development and shooting.