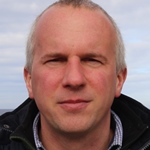 Speaker Matt Lewis is a shipwreck survivor, and author of the bestseller Last Man Off. Traditionally, it is the captain who is the last man off a sinking ship – but when the fishing boat Sudur Havid hit trouble in an Antarctic winter storm, it was Matt who ordered the crew to abandon, and then manhandled the skipper into a life raft. on the wild Southern Ocean. When the ship’s pumps failed and water flooded the factory, the officers failed to act and then fell silent or disappeared as the crisis deepened. It was left to the naive newcomer, Matt, to co-ordinate the evacuation of the crew into life rafts. The ship crushed his raft, flooding it with -1°C seawater. By the time they were rescued, 17 of the 38 crew were dead.

An unlikely leader, Matt stepped up to try to save his crewmates. His unique and inspiring story illustrates the importance of communication and leadership in a crisis, and shows the dire consequences of poor preparation. Matt’s presentations can be given as a first-hand description of events as they unfold, allowing the audience to draw their own conclusions, or as a dissection of the tragedy highlighting important lessons in health and safety, or leadership and command.

Harvard MBAs could also scour the pages (of Last Man Off) as a case-study in dysfunctional workplaces and woeful man-management. Sunday Times