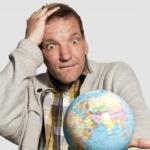 Henning Wehn is a German Comedian and the self-styled German Comedy Ambassador to the United Kingdom. This should be a thankless task, in the face of the commonly held public opinion that the German people have little to no sense of humour, perhaps Henning is the exception that proves the rule.

As a broadcaster and comedian Henning is often found on TV and Radio doing his utmost to both uphold and mock German stereotypes, while poking fun at the inefficiency of the British populace.

As a comedian Henning has supported Stewart Lee on tour as well as made regular guest appearances on panel shows such as Have I Got News For You, QI and Would I Lie To You