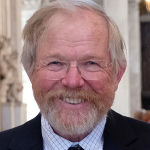 Bill Bryson is a best-selling American author of humorous books on travel, the English language and science.  He shot to prominence in the UK with the publication of Notes From a Small Island (1995) an exploration of Britain for which he made an accompanying television series.  He also received acclaim for the publication of A Short History of Nearly Everything (2003) which popularised scientific questions for a general audience.  His volume of travel work includes the titles The Lost Continent, Neither Here Nor There, Down Under and African Diary.

In 1995 he returned to the USA to live in New Hampshire for a few years, the stories from which feature in his book I’m a Stranger Here Myself (titled Notes From a Big Country, in the UK).  In 2003 the Brysons and their four children returned to England, and now live in Norfolk.

In 2004, Bill Bryson won the prestigious Aventis Prize for best general-science book with A Short History of Nearly Everything. This concise and popular piece of literature explores not only the histories and current statuses of the sciences, but also reveals their humble and often humorous beginnings. One “top scientist” is alleged to have jokingly described the book as “annoyingly free of mistakes.”  A children’s version of the book was released in 2008.  He has also edited two further science titles, On the Shoulders of Giants (2009) and Seeing Further: The Story of Science, Discovery and the Genius of the Royal Society (2010).

Bill Bryson has written two works on the history of English language — Mother Tongue and Made in America – and a usage guide, Bryson’s Dictionary of Troublesome Words.  These books were popularly acclaimed and well-reviewed, though they received criticism from academics, who claimed they contained factual errors.

His titles beyond the spheres of travel and language include his memoir about growing up in 1950s America, The Life and Times of the Thunderbolt Kid (2006), Shakespeare: The World as Stage (2007) and At Home:  A Short History of Private Life (2010).

From 2005 to 2011 Bill was Chancellor of Durham University, succeeding the late Sir Peter Ustinov. He has been awarded honorary degrees by numerous universities. In 2005, Bryson received the President’s Award from the Royal Society of Chemistry, for advancing the cause of the chemical sciences, and in 2007, he was the Schwartz Visiting Fellow of the Pomfret School in Connecticut.