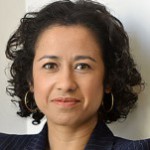 Samira Ahmed has a long and distinguished career as a journalist and broadcaster, beginning as a trainee news reporter for the BBC. She has presented Newswatch on BBC 1 as well as Front Row and Something Understood on Radio 4. Other highlights include presenting BBC Radio 4’s PM, Sunday and The World Tonight. She also fronted Radio 3’s Night Waves – the stations flagship arts programme. She also hosted two series of This Morning Live, a BBC One show that focuses on religion and current affairs.

After beginning as BBC a news trainee, Samira worked on a variety of news and current affairs programmes, including Newsnight and the Today programme, as well as stints on BBC World and BBC News 24. She also covered the OJ Simpson trial, while she was the BBC News correspondent for Los Angeles. In 2000, Samira moved to Channel 4 News as a reporter and presenter, she remained there until 2011, when she transitioned into a freelance role that brought her back to the BBC.

As a journalist, Samira has appeared in he pages of The Guardian, The Independent and The Spectator, as well as writing for the Big Issue on a regular basis.

Outside of news Samira specialises in the intersection between culture, politics and social history. She has created a number of documentaries for Radio 3 and 4 that explore pop culture with a keen eye for the way it influences society. Samira also has a passion for seeking out voices that she perceives to be ignored or forgotten by some news corporations. As a speaker of Hindi/Urdu, German and French alongside her own mixed religious background and Indian/Pakistani roots, she’s in a key position to highlight minorities and to help people to make their voices heard.