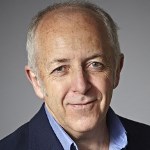 Journalist and BBC reporter Jeremy Bowen is best known for his long-standing coverage of the Middle-East whilst based in Jerusalem from ’95 to 2000. As a war correspondent Jeremy has worked in over 70 different countries and found himself in hair-raising circumstances, coming under fire on several occasions, including being shot in the head by a pellet loaded shotgun while in Egypt in 2013. Jeremy’s ‘fixer’ and driver was killed after their car came under fire by a tank while covering the Israel Defence Force’s pullout from Lebanon in May 2000. He has since spoken publicly of PTSD he has since suffered.

Jeremy interviewed Muammar Gaddafi during the Libyan civil war in 2011, and spoke to Syrian President Bashar al-Assad in February 2015 in an exclusive interview for the BBC. He has won a host of awards for his daring brand of journalism, including an International Emmy in 2006 for coverage of the war in Lebanon and a Sony Gold Award for News Story of the Year for his coverage of the arrest of Saddam Hussain.

Jeremy has also presented several documentaries for the BBC including the three part series BBC1 ‘The Son of God’ looking at the life of Jesus. This was followed up with a documentary on Moses, both programmes using scientific and contemporary historical evidence to investigate religious figures of antiquity in unparalleled depth.