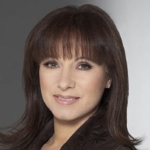 Jacqueline Gold CBE is CEO of Ann Summers and Knickerbox. She bagan her career at Royal Doulton before working for her father David Gold in the businesses retail shops. She subsequently saw the potential to change the focus of the business by adopting the ‘Tupperware’ style of selling through party’s in the home and develop a powerful female inclusive and safer lifestyle-pleasure brand far removed from the traditional industry stereotype.

In 1993 she was appointed chief executive of Ann Summers, and subsequently opened the first Ann Summers store on the British high street. Online sales were developed with the launch of annsummers.com in 1999 and the company now operates 138 stores in the UK and Ireland with annual sales of over £150 million.

Gold has been named Retail Week’s Most Powerful Woman in Business and Barclays Bank’s Most Inspirational Businesswoman in the UK. In 2014 she was listed in the top 60 most influential over 50’s on Twitter.

She supports charities including The Children’s Trust, The Retail Trust, RELATE and NAPAC, also supporting business start-up through a weekly social media campaign called #WOW. Her Championing Working Women initiative has provided inspiration, support and attention for the cause of working women.

In 2015 she was awarded a CBE for services to Entrepreneurship, Women in Business and Social Enterprise.