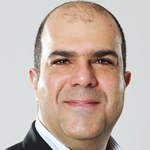 Stelios is best known for starting easyJet, the airline that changed the face of air travel, in 1995 at the age of just 28. Today easyJet has become one of Europe’s largest low cost airlines with a fleet of more than 300 jets carrying more than 88 million passengers in 2018.

Stelios was born and educated in Athens before coming to Britain in 1984 to continue his education at the London School of Economics. He graduated from the City University Business School with an MSC in Shipping Trade and Economics. Funded by his father he then set up his first business, Stelmar Shipping which he floated on the New York Stock Exchange in 2001. By the time he sold it four years later to OSG Shipping Group it was worth approximately $1.3 billion.

In the meantime he founded the budget airline easyJet. After floating the massively popular airline on the London Stock Exchange in 2000 he stepped back to concentrate on extending the easy brand to several businesses, all dedicated to offering consumers more value for less. These include easyHotel, easyCar, easyBus, easyOffice and easyGym, which are all owned through his private company easyGroup. Stelios and his family continue to own 38% of easyJet in which he retains a keen interest.

He has established hugely successful enterprises in 17 different industries, from personal finance to pizza delivery. In 2006 he was given a knighthood for services to entrepreneurship.

Stelios remains grateful for early help, in terms of education and support. He is interested in education for under-privileged students and in sustainable development. In 1992 he founded CYMEPA, the Cyprus Marine Environment Protection Association, which is a non-profit making association of ship owners and Cyprus-based business people who believe in sustainable development.

In 2005 he made a £3 million pledge to both his alma mater, the London School of Economics and the City of London Cass Business School, to fund 100 scholarships over 10 years in each establishment. The students will be known as the Stelios Scholars.

In 2006 he established the Disabled Entrepreneur of the Year Award with the disability charity Leonard Cheshire. The same year he sold his private art collection for a total of €730,000, the proceeds of which went to a Greek children’s charity.