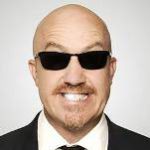 Andy Parsons is a stand up comedy veteran, whose ten year run on popular BBC2 panel show Mock The Week saw him bring his unique brand of satire to audiences across the UK. Andy’s talent for lampooning current affairs was honed to perfection on Spitting Image where he contributed as one of the main writers from 1993-96 and he has a wealth of TV credits, sell out shows and plaudits to his name.

Andy’s road to success saw him leave behind a legal career for the stand up club circuit, before trying his hand at comedy writing, first with Weekending, before his breakthrough with Spitting Image. Andy has toured nationally and internationally, with five sell-out tours in the UK as well as trips to Canada, Ireland, New Zealand and Australia. As well as his stint on Mock The Week, Andy has appeared on a host of TV and radio shows including Live at the Apollo, QI, They Think It’s All Over and The PMQ Show.

In 2002 Andy won the Time Out Comedy Award and has released four DVDs from 2011’s Gruntled to 2015’s Live & Unleashed – But Naturally Cautious, with slick set-ups and killer punchlines that see his audiences howl with laughter. Andy also hosts the Slacktivist Action Group podcast that features prominent guests that include MPs, experts, journalists and comedians converging to discuss, dissect and laugh at all the important issues. Andy makes for a genial awards host.